Bologna: Culture is invaluable in times of COVID19

An exclusive interview with Bologna featured in the ‘100 days, 100 ways’ campaign from EUROCITIES.

The COVID-19 pandemic has turned our lives upside down and disrupted our societies beyond precedent. We are faced with a global health crisis as well as significant economic and social repercussions. The immediate impact of the crisis affects cities across all sectors. The cultural sector and cultural heritage are particularly affected, and we are keen to know more about how cities are supporting their cultural heritage on the ground at the moment.

To get a better and more complete understanding of the effects of the COVID-19 crisis on cultural heritage in your cities and the specific needs of the heritage sector to overcome it, we spoke to Francesco Volta about the measures that are being taken in Bologna, one of the cities that has been developing its cultural offer through the ROCK project.

What is your city’s approach to cultural activities and events during lockdown?

Bologna’s cultural system is wide and articulated, and the cultural offer has always been at the top of the national ranking, therefore Bologna is deeply suffering this period of forced freezing of activities.

As a first reaction, immediately following the initial closure measures adopted by the Italian Government on 24 February (closure of museums, theatres and cinemas, banning of live events, etc.), Bologna Culture Department requested feedback from cultural organisations through a questionnaire, filled in on a voluntary basis, in order to investigate the effect of the measures taken (in particular on events and cancelled activities). After the government decision to extend the closure measures until 3 May, the department is collecting further data and deepening knowledge on the socio-economic effects due to COVID-19 in comparison with the region, the Ministry for Culture and many cultural organisations of the territory.

As a result of the measures imposed by the government, the Municipality of Bologna also had to suspend many of its directly managed/organised cultural activities (including museums and libraries), as well as to revise its cultural summer programme (including ‘Bologna Estate’ and ‘Bologna Estate Piazza Verdi’, which had been organised through calls for proposals, seeing the participation of many local cultural organisations).

Regarding the financial support to the cultural sector, economic measures have been introduced almost immediately at national and regional level, aimed at guaranteeing the survival of cultural enterprises and organisations and supporting workers ("Cura Italia" and "Liquidity" decrees, economic measures by trade associations, e.g. SIAE and NUOVOIMAIE). The Municipality of Bologna, for its part, decided to suspend some taxes for productive and commercial activities until September and deliberated on the suspension of renting costs for many cultural and third sector organisations carrying out their activities in buildings owned by the municipality.

As far as the reprogramming of cultural events is concerned, the necessary safety measures are being studied in order to be able to reprogramme city cultural events in new ways (especially live events, which are the most problematic ones from a safety point of view).

Moreover, as a response to the closure, the municipality together with many cultural organisations has developed a vast programme of cultural contents which is available online (a new social TV streaming programme called "Il volo del Colibrì", online exhibitions, historical documentaries, etc.).

What are the immediate effects of the pandemic on your local cultural heritage?

In accordance with national regulations, the municipal museums and libraries have been closed and other cultural activities with public attendance have been suspended. For all municipal employees in the sector, including those employed in the offices, remote working/smart working modalities have been activated. Therefore, no measures for the safety of workers or sites have been necessary for the moment, but it will be fundamental to implement them at the end of the lockdown and in view of the reopening of culture places.

From an economic point of view, the closure of services and the suspension of activities generated a significant drop in revenues, with a consequent shortfall in the municipal budget.

What have you learned so far - what were your biggest mistakes from the management of this crisis so far? What is working best?

An important part of the cultural activities of the City of Bologna is financed by the city tax, a tax paid by tourists visiting the city. This type of income constitutes two thirds of the municipality's budget for the support to cultural production, cultural welfare and the regeneration of cultural and creative spaces/facilities and has so far allowed us to develop and support important policies. The health emergency that is putting the cultural sector in difficulty has also had very strong consequences on tourism. Therefore, a better balance between sources of income - less directly dependent on external shocks - would probably have allowed more flexibility in responding to the situation.

How are ROCK activities affected?

Some ROCK actions which were expected to be completed by the end of the project (end of June) were suspended from the beginning of the health emergency, given that one of the COVID-19 containment measures was to block public works. Now, since the project is being extended until the end of the year and that from 4 May many of the work activities started again, it will still be possible to carry out and complete the ROCK Bologna pilot actions within the university area, such as the Light Plan and the regeneration plan for Piazza Rossini (former car park).

The U-area for All project (conception and experimentation of inclusive guided tours in the University area, allowing citizens and tourists to discover and live the cultural richness of the area in a more accessible way) is proceeding with the creation of a tourist app, also accessible to people with motor or sensory disabilities. In particular, work continued in smart working modality with colleagues involved to enrich the contents of the app and identify the thematic routes between Bologna’s main square (Piazza Maggiore) and Via Zamboni (experimental area of the project). In order to consolidate this service, Bologna would like to test the app with the citizens who were already involved in the first phase of the exploration of the area; obviously, this will happen as soon as it is possible and applying all the security measures indicated by the government. On the other hand, the installation of tactile maps to be installed at the entrance of Via Zamboni (precisely in Piazza della Mercanzia) has been suspended, as this type of project involves the Public Works Department of the municipality.

Moreover, in this lockdown phase, and together with our partners, we reorganised the entire work for the final conference that was scheduled for mid-May in Bologna. We opted for a week-long online rescheduling of the event in October 2020 in the form of webinars and meetings on different aspects of the ROCK project.

Have ROCK actions, tools or findings been helpful for you in addressing the coronavirus crisis?

ROCK tools and interventions have been useful in at least two ways. The data collection tools activated within the project, in particular those for crowd monitoring in the university area (DFRC sensors [AC1] for crowd monitoring), made available a series of data which has been very useful to immediately understand and monitor in real time some consequences of the lockdown (effects on mobility, tourism, cultural fruition). For example, in the first week of lockdown a drop in trips of more than 40% was detected.

From another point of view, the development of opportunities and best practices in terms of environmental sustainability has meant that the city could already count on the availability of tools to deal with the needs imposed by the health emergency: a human scale centred city, more inclined to use bicycles, with sustainable mobility services also ready for businesses and commercial activities (e.g. the cargo-bikes made available by Dynamo Velostazione[AC2] , useful both for the continuation of business and to reach the most fragile people with food and goods).

What consequences do you expect as a result of this pandemic (in the short and longer-term) for your local culture and cultural heritage?

In the short term, the lockdown has generated a major liquidity problem, both for public bodies and for private subjects operating in the cultural field; this means a scarce availability of resources in the immediate future, which may lead some operators to close or not to have the possibility of resuming their activities in full. In the long term, the enjoyment of cultural content and live entertainment is likely to change, and the path will not be easy. Moreover, workers in the culture and entertainment sector will probably suffer more than others, both because the sector will be hit hard and longer, and because it is a labour market where workers are rather weak and contractually poorly protected.

The most urgent needs (some of which have already been addressed, for example with the Cura Italia and Liquidity decrees) are therefore to guarantee financial support to those working in the cultural sector and to strengthen the contractual position of workers in the sector, so that they are not excluded from the welfare measures provided for other categories of workers. On this last issue, local politics has already acted, together with cultural operators themselves, to bring the issue to the attention of the national government and to turn the crisis into an opportunity for the development of a more widespread awareness of the strategic and economic importance of cultural field operators.

What future do you foresee for culture in your city? What could lead to a more intertwined relationship with sustainable development?

It is planned to organise cultural events for smaller audiences, focusing on quality and diffusion in the territory rather than on the quantity of the public. For the programme of summer events organised by the Municipality of Bologna with the cultural operators of the territory (Bologna Estate), the intention is to organise many small events in all the city districts, as well as cultural itineraries in the green areas of the metropolitan city. The online cultural offer, already activated in an experimental phase in the lockdown period in many forms (for example, the social TV streaming project Il volo del colibrì) will also be strengthened: from this point of view, the crisis could be a stimulus to innovation.

In your opinion, how could cultural heritage in cities contribute to Europe’s socioeconomic recovery in the aftermath of the pandemic?

The lockdown situation and the increased availability of free time has encouraged many people to rediscover cultural consumption and its value, obviously in those forms that can be enjoyed from home. With the loosening and then the end of the lockdown, the challenge for local cultural systems will be to engage these users and strengthen these pathways. The role of the municipalities will be to participate in the decisions for the post-lockdown phase in order to identify, also in an innovative way, those measures that can guarantee at the same time the safety of citizens and the creation of new content and new ways of enjoyment of the existing cultural heritage. From this point of view, the Municipality of Bologna, thanks to the long-established relationship with local cultural operators, is already playing and intends to play an active accompanying role (for example, working tables on the safe reopening of libraries, museums and open-air cinemas are already active, and knowledge sharing is beginning on the subject of live performances). 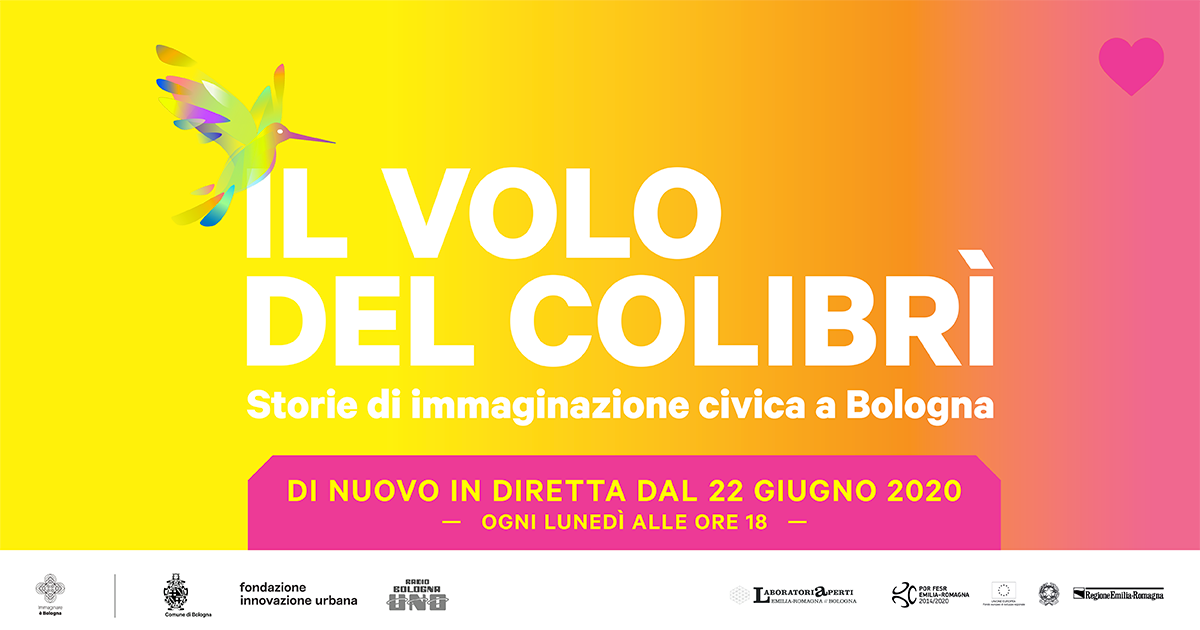