Sensors to scan emotions are installed in public places

The Japanese electrotechnical manufacture Panasonic transformed its old plants in the northern suburb of Osaka this spring into the smart Suita town, where the impact of human activities on climate is reduced with the help of the most advanced technologies. Such modern community is already the third in Japan. It is distinguished from its predecessors by special attention to the welfare of residents and active fighting with social isolation. The potential of the technologies to solve various social problems is definitely big, which is manifested by the measurement systems of human emotions installed in Vilnius, as well.

The smart community Suita in Japan is the third part of the project implemented by company Panasonic. As written in BusinessGreen, the project’s vision is to integrate especially modern smart devices that emit little carbon dioxide into each area of human activities, hence, reducing the damage caused by humans to environment.

It is not limited to the issues of climate changes

The community’s problems receive exceptional attention in Suita smart town. One of them is social isolation of elderly residents. In order to resolve this challenge, the artificial intellect cameras, digital health programmes were installed and special sensors were fitted at homes of elderly people. The wellness centre is operating in the town, as well as home for residents with dementia, and the services of nursing at home are provided. It is an effective mode to solve the problems.

The rudiments of a smart town are present in Vilnius already

When Prof. Habil. Dr. Artūras Kaklauskas from the Department of Construction Management and Real Estate of Vilnius Gediminas Technical University was asked by LRT.lt whether it would be possible to create a community similar to Panasonic smart town in Lithuania, he claimed that this would be very easy if sufficient financing was provided. As the financing is lacking, instead of individual boroughs, where smart solutions are integrated into completely all activities, individual technologies are introduced into general city structure. However, although not so concentrated, these innovations may respond to the community’s interests equally well and solve similar problems to those highlighted by Panasonic in its project.

Several examples, how smart technologies are adjusted to urban life, could be found in Lithuania already. These are smart sensors in Vilnius that are measuring human emotional state in real time. This initiative is a part of ROCK project financed by the EU, which purpose is to expand the potential of urban cultural heritage with the help of technological tools, to revive and promote sustainable development and economic growth. In addition to Vilnius, nine European cities took part in the project: Lyon (France), Bologna and Turin (Italy), Liverpool (United Kingdom), Athens (Greece), Cluj-Napoca (Romania), Eindhoven (Netherlands), Lisbon (Portugal) and Skopje (North Macedonia). Vilnius was chosen by the partners as the location of UNESCO heritage and as a model city that could transmit its experience to other participants of the project.

The smart sensors measuring emotions are the initiative of Vilnius City and the scientists from Vilnius Gediminas Technical University led by Prof. A. Kaklauskas. The sensors are installed in ten different places in the city: in the city centre, in industrial and recreational areas. The devices record, how the person feels in certain place – happy, pleasantly surprised, interested, angry or disgusted maybe. In addition to facial expressions, various physiological data are measures, for example, the person’s pulse, face temperature, and respiratory frequency.

These data help to form a happiness index. When it is known, in which places in the city the residents feel the happiest and what activities provided the biggest satisfaction, it is possible to expand such areas and to repeat them in several places in the city. This improves both – human emotional state and image of the city.

“Happiness is a direct reflection of subjective reality. It is positively affected by the public spaces opened in the city, cultural activities, and their interactions. Their importance became especially evident during the lockdown due to Covid-19, when the happiness index decreased down to 20,42 percent and boredom increased up to 88,39 percent. “The spoiled mood” was improved by the Old Town that turned into an outdoor café during the pandemic. There, music was played and the people were communicating safely – the happiness index increased up to 43,8 percent,” – says the City of Vilnius.

As stressed by the project’s organisers, Vilnius happiness index is among numerous solutions of smart city implemented in the capital. The municipality uses the Internet of Things, IoT, to make use of the smart technologies for improvement of lighting, traffic control, reduction of air pollution, agriculture, health protection, retail and logistics in the city. These environment-friendly methods similar to smart cities of Panasonic are used to improve human life quality.

Full article in the Lithuanian National  radio and TV portal: 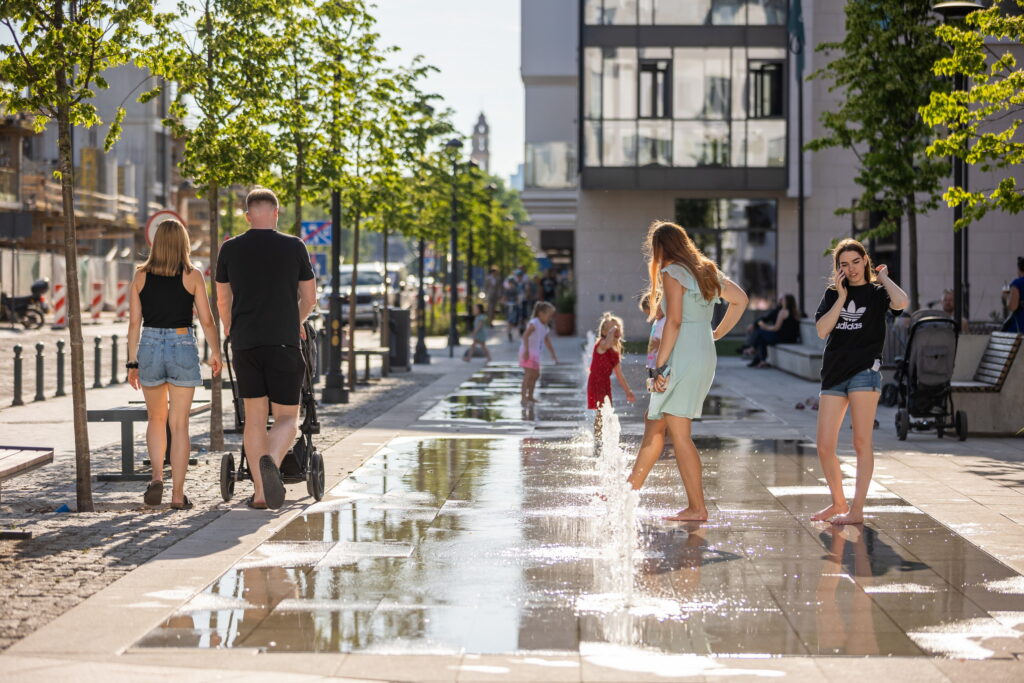